After the successful release of Mr Brown's debut instrumental EP 'Beats For Days' his next vinyl offering comes in the form of a limited edition (300 copies), hand numbered, clear red 7” vinyl and features the lyrical talents of US MC Copywrite! This song was originally recorded in 2008 and has yet to be released....... until now!

The song is called 'We Don't Quit' and is pure boom bap hip hop through and through. Heavy hard hitting beat, tight scratches and Copywrite coming ripping it up on the sort of beat you rarely get to hear him on these days, basically all the ingredients needed to cook up a hip hop banger!

As an added bonus Mr Brown has thrown in 2 extra bonus beats that are exclusive to the 7” vinyl release.

All tracks Produced by Mr Brown. 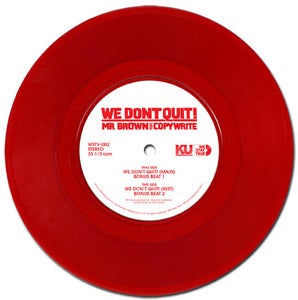